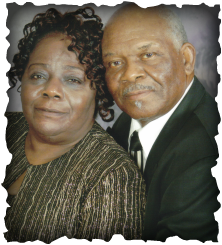 LIVING THE VISION: The Ministry of Dr. James C. Sanders and First Lady Dr. Addie B. Sanders Dr. James C. Sanders was born in Wharton, Texas and was inspired by his lovely wife, Addie B. Sanders, to be baptized in the Name of Jesus and was filled with the precious gift of the Holy Ghost. He, his expectant wife, and two children relocated from San Antonio, Texas, to Los Angeles, California in 1956.Upon arrival, he placed his membership at Bethany Community Church under the late District Elder I. W. Bell there he accepted his calling from God and received his ministerial license. While under the spiritual leadership of the late Bishop Robert W. McMurray he became active in the ministry as an usher, musician, and minister of the gospel of Jesus Christ.  Dr. Sanders adopted the philosophy of Bishop McMurray that states, “Whatever you start out to do, make sure you finish it.” He also taught him to instill into believers and non-believers that those called to follow Christ must aspire to live a saved and sanctified life through dedication and preparation for the second coming of our Lord and Savior, Jesus Christ. From the point of ordination, Pastor Sanders ministered to the spiritual needs of the community.  In 1976, he and his wife became foster parents. They had a desire to help unfortunate children that were struggling against difficulties and great odds to have an opportunity to live in a safe, healthy, and spiritual environment. In an effort to help more children, Pastor Sanders established the following: State licensed preschool and elementary school, food and clothing distribution, and low-income housing.  He also opened Tapatia Food Market and “Nuevo Amanecer” Pentecostal Church to further cater to the public. Pastor Sanders is grateful to God that he was able to be such an inspirational member of his community.    Dr. James C. Sanders accepted his calling as a pastor in June of 1978. Having the support and admiration of his family, he followed the instruction of God and began a ministry in his home.  The Shekinah glory was in the house and many souls were saved in this rapidly growing ministry. Several months later, being commissioned by God, he was directed to the city of Long Beach. There he founded Greater United Faith Apostolic Church. At the time, the Pentecostal Assemblies of the World ordained him. In 1988, Pastor Sanders was elevated in the ministry and received his Doctorate of Divinity from Tuskegee, Alabama.   Dr. James C. Sanders has been acknowledged for his contributions in the community from the City of Los Angeles, City of Long Beach Governor and the President of the United State.  In addition, the AMA awarded Pastor Sanders for his faithfulness to the ministry with the “Shepherd Award  We are very grateful to have our pastor with us this year celebrating 32nd years serving the city of Long Beach. On January 11, 2006, Dr. James C. Sanders under went open heart surgery which God has blessed him to endure until this day.  His continuous prayer is to miraculously recover 20/20 vision.  He appreciates the help of his wife, First Lady Addie Sanders, family members, church members and all who continues to pray for him. In spite on going opposition, God’s anointing continues to motivate him to finish what he started out to do.  Yes, we have seen God’s hand at work!  God has truly blessed and enriched the lives of many through our Pastor. Amen! First Lady Addie SandersFirst Lady Addie Sanders is the fourth of eleven children. She was saved and filled with the Holy Ghost in San Antonio, Texas under Bishop R.W. Waul in 1952. She is the backbone to her husband, Dr. James C. Sanders, Pastor and Founder of Greater United Faith Apostolic Church. Together, they have five children, nineteen grandchildren, and nine great-grandchildren. They have raised eight foster children.  Her desire was always to instill the Word into her children.In 1956, First Lady Sanders moved to Los Angeles with her family, and joined Bethany Community Church under the leadership of the late District Elder I.W. Bell.  While under the guidance of the late Bishop R.W. McMurray, she was a Sunday school teacher, choir member and a faithful PYPU member.First Lady Sanders was very instrumental in the organization of Greater United Faith Apostolic Church.  As a dedicated prayer warrior laboring in the vineyard, she became a teacher of the word.  She worked with the sick and shut-in for many years.  The auxiliaries established by First Lady Sanders are: Intercessory Prayer, Women’s Auxiliary, and the Women’s Outreach Fellowship.  She is also the coordinator of the Ministers Alliance at Greater United Faith Apostolic Church.  She is also the co-founder of United Faith Community School and United Community Transitional Housing. In honor of her faithful service she has received numerous awards from former President and First Lady Bill and Hilary Clinton, Governor Gray Davis, Maxine Waters, and Yvonne Burke.  In 2002, First Lady Sanders was honored for her faithfulness to the ministries with the “Virtuous Woman Award” from the AMA.   This virtuous woman has been molded and shaped in to God’s Vessel.  She inspires the lives of all who have the pleasure of meeting her. In October of 2007, First Lady Sanders under went surgery.  It was her faith in God, the love of her family and the players of the saints that allowed her to pull through such a difficult surgery.  Even in her time of recuperation, she wanted nothing more than to stay in the presence of the Holy Ghost.  While in the hospital, First Lady Sanders would call one of the church members and listen to the Greater United Faith Church sermon through her cell phone.  Her spirit was calmed by the presence of the Word.  First Lady Sanders continues in high-spirited love, patience, and concern for the souls in the community, as well as those in the Greater United Faith church family.